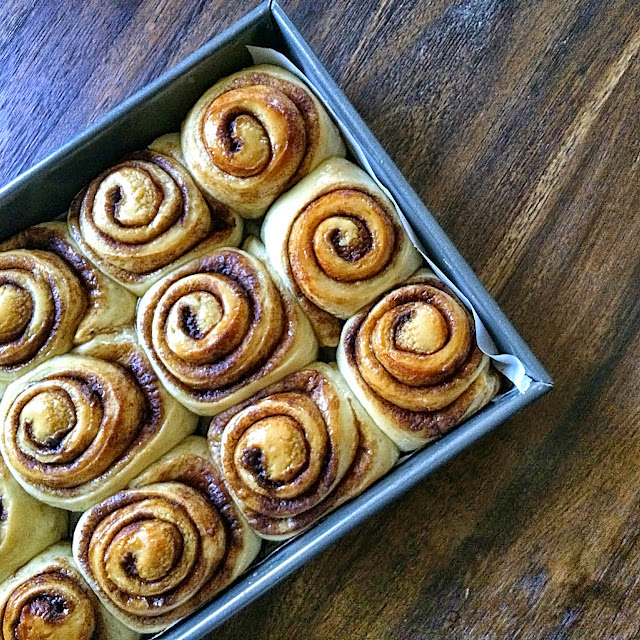 There's just something magical about the smell of cinnamon. Whether you're baking a pie or a batch of cookies, this sweet and spicy scent will find its way into every corner of the house and beckon you to follow its trail back into the kitchen. To me, it's the quintessential scent of the holidays.  And these warm and cozy cinnamon rolls will definitely bring some holiday cheer into your home.

What I love about these cinnamon rolls is that they have just the right amount of cinnamon swirled into them.  There's nothing worse than biting into a cinnamon roll with a wimpy amount of cinnamon.  Another wonderful thing about these cinnamon rolls is that they stay soft and chewy for days, even after I stored them in the refrigerator (my secret: I used my pandesal recipe for the dough).  Also, instead of spreading cream cheese frosting or a powdered sugar glaze over them, I brushed some maple syrup instead.  It gave the cinnamon rolls just a light kiss of sweetness as well as a mouthwateringly delicious gloss.

I hope you make these cinnamon rolls and let the sweet scent of the holidays fill your home :-)

for the glaze:
1/4 cup maple syrup

In a large mixing bowl, dissolve the yeast and 2 tsp. sugar in warm water.  Wait about 10 minutes for the yeast to activate (you'll see the liquid become frothy).  In a medium mixing bowl, sift together bread flour, sugar and salt. Pour in a cup of the flour mixture into the yeast/water.  Add the remaining flour, about 1/2 cup at a time, until the dough starts pulling away from the sides of the bowl. Knead for about 10 minutes or until it becomes smooth and elastic.  You can do this by hand onto a lightly floured surface but I prefer using the dough hook attachment in my stand mixer or hand mixer.  Lightly coat a bowl with oil then place the dough inside; cover bowl with a damp towel or plastic wrap.  Allow the dough to double in size, about 1 hour.
Preheat oven to 350 degrees F. Lightly grease a 9x13 pan with oil or line with parchment paper. Turn over dough onto a lightly floured surface. Brush with oil and sprinkle with brown sugar, ground cinnamon and salt. Roll the dough and cut into 12 equal pieces. Place onto prepared baking pan. Cover with damp cloth or plastic wrap and allow to rise a second time for about 30 minutes. Bake for 30 minutes or until golden brown. Remove from oven and brush with maple syrup while warm.
Posted by Art of Dessert at 4:05 PM