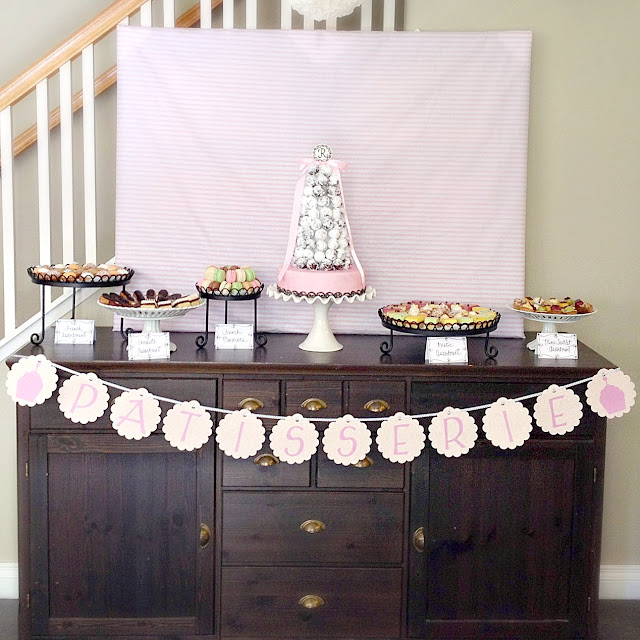 Here's another treasure from the past that I didn't get a chance to post.  As you might have read from a previous post, my sister Ruth got married last year and as the matron-of-honor, I did host a bridal shower for her.  It was a Parisian-themed party, with lots of pink and black decorations, cafe music playing in the background and all the Frenchy food you could think of, including dessert of course.  And before you start thinking that this sounds a lot like the movie, "Bridesmaids," no I didn't give away any free puppies.  My cousin Kristen was not too happy about that.  Oh well.  C'est la vie, I guess... 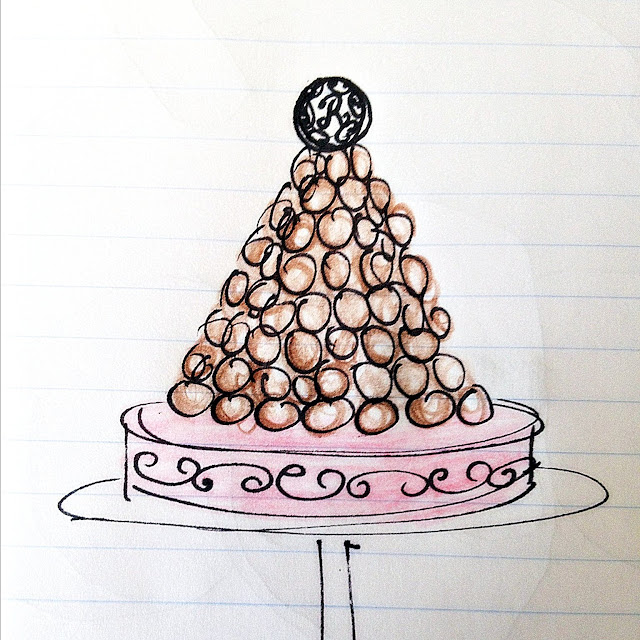 As you might have guessed, the first thing that I started to do was sketch a design for Ruth's bridal shower cake.  She LOVES champagne truffles.  She loves them so much that she wished she could have had a wedding cake made entirely out of them.  In the end, though, she decided she wanted just a simple white cake.  But I thought it would be so much fun to make her a champagne truffle cake for her bridal shower.  So I had this idea to create something similar to a croquembouche, which is a dessert typically served at French weddings.  It's basically a tower of cream puffs stuck together with caramelized sugar.  But instead of cream puffs, I was going to use champagne truffles. 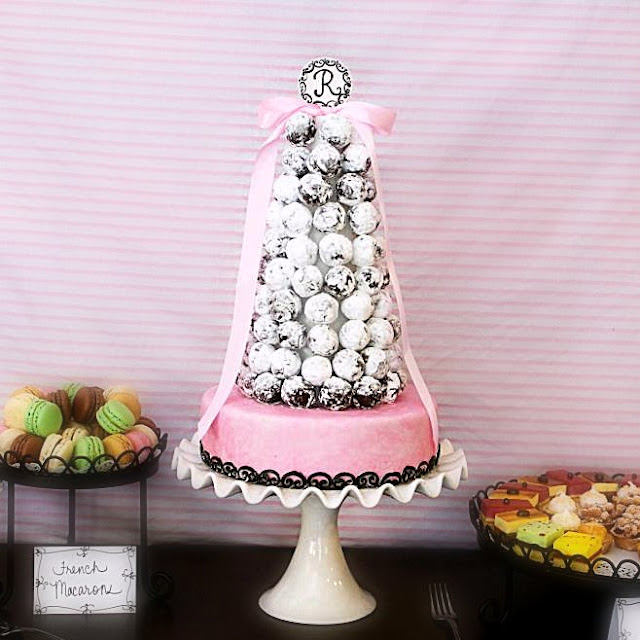 To create this champagne truffle "croquembouche," I got a Styrofoam cone from the craft store and covered it with wax paper.  Then I used toothpicks to attach the truffles to the cone.  I started at the bottom and then worked my way up.  This was actually trickier than I expected.  As much as I tried to stick the truffles as close together as possible, I still ended up with gaps.  Well, I guess it's a good thing that they're covered in powdered sugar because the gaps weren't too obvious.  I topped the tower of truffles with a simple monogram I made out of rolled fondant and draped a pink satin bow over everything.  For the base, I made a chocolate cake with champagne truffle filling that was covered in pink rolled fondant and surround with black fondant scrolls. 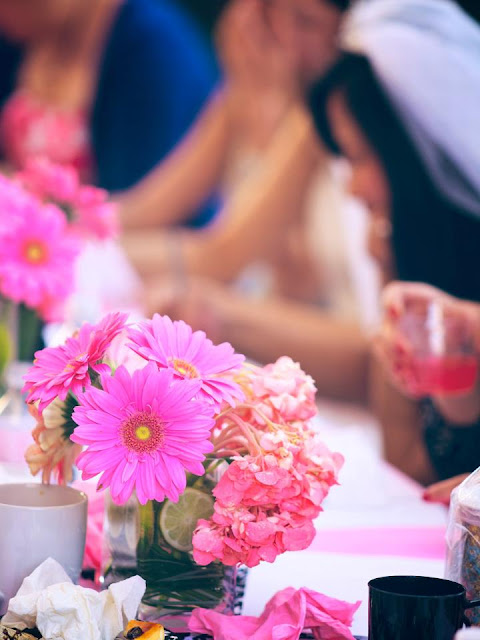 To tell you the truth, I'm not much of a party planner.  Oh sure, I have a ton of brilliant ideas in my head but when it comes to executing those ideas, I'm a jumbled mess.  I don't know why.  I guess I'm too much of a scatterbrain to coordinate stuff like food, invitations, decorations and what not.  So thank goodness for my friend Dary, the party planning extraordinaire, who came to my rescue.  Hallelujer!  She took my scatterbrain ideas and knew exactly how to put it all together.  She let me borrow all her party supplies, from serving platters to table linens and decorations.  She even made cute labels for the party favors and the water bottles. And with the help of the bridesmaids and a few more of my friends, we had a gorgeous bridal shower for Ruth. 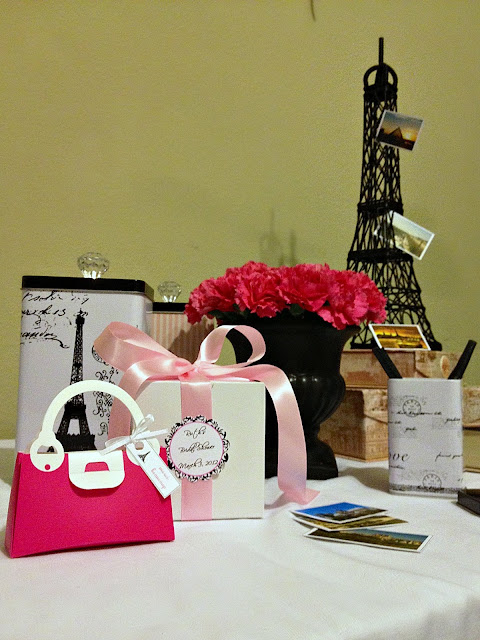 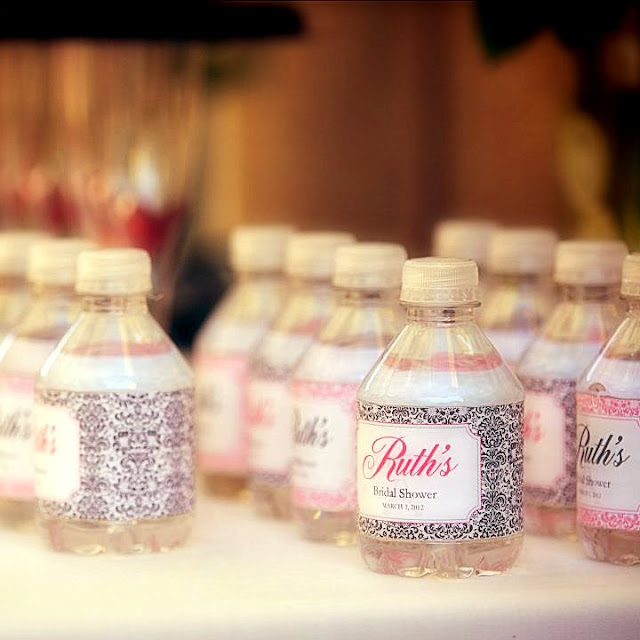 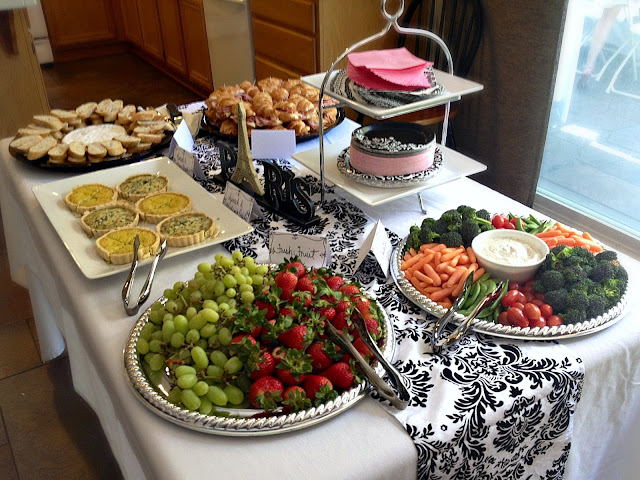 Now that the party is beautifully set up, it's time to talk about the food.  Tying in with the Parisian theme, the menu included baguette and brie, ham and cheese croissants, assorted quiche, crudités and fresh fruit. 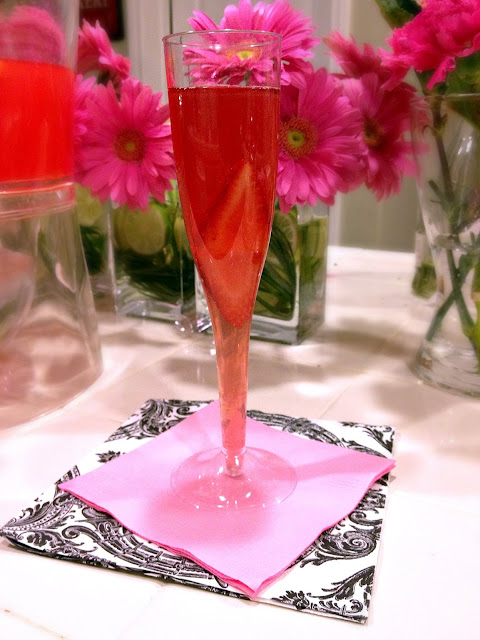 For drinks, I made a champagne punch by mixing together 2 bottles of champagne, 1 bottle of lemon-lime soda, 1 pint raspberry sorbet, 1/4 cup Grand Marnier and sliced strawberries for garnish. 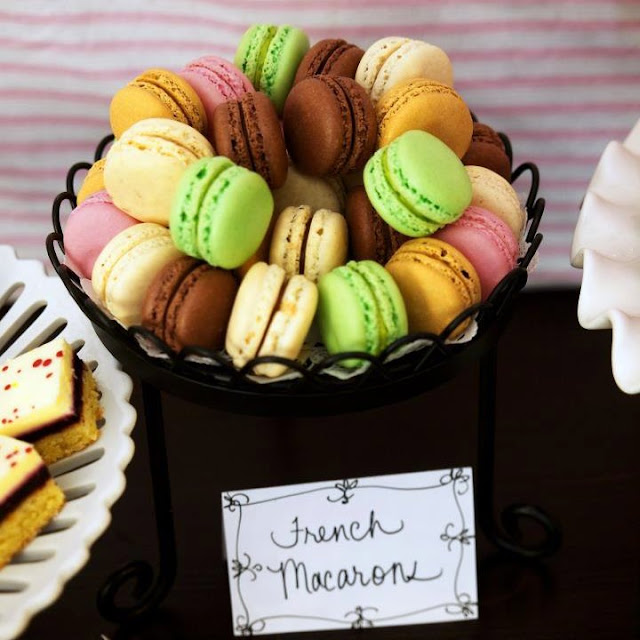 Photo by Ryan Rivera
In addition to the bridal shower cake, there was also a beautiful assortment of French pastries from Opera Patisserie. 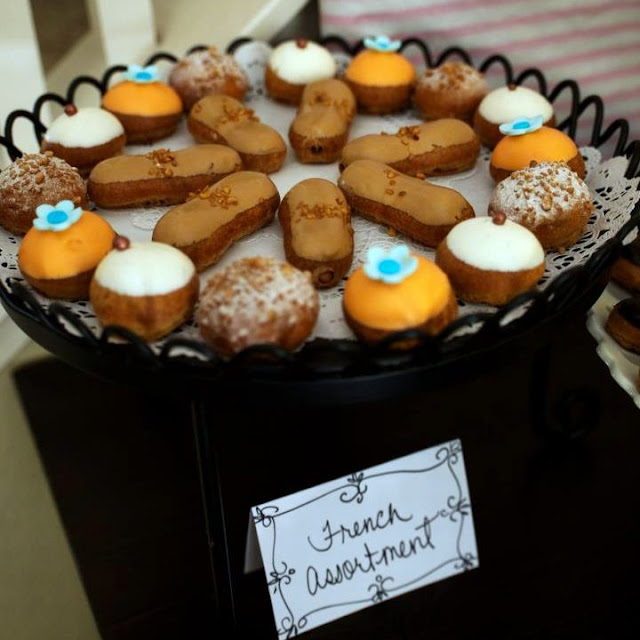 Everyone loved the delicious pastries! 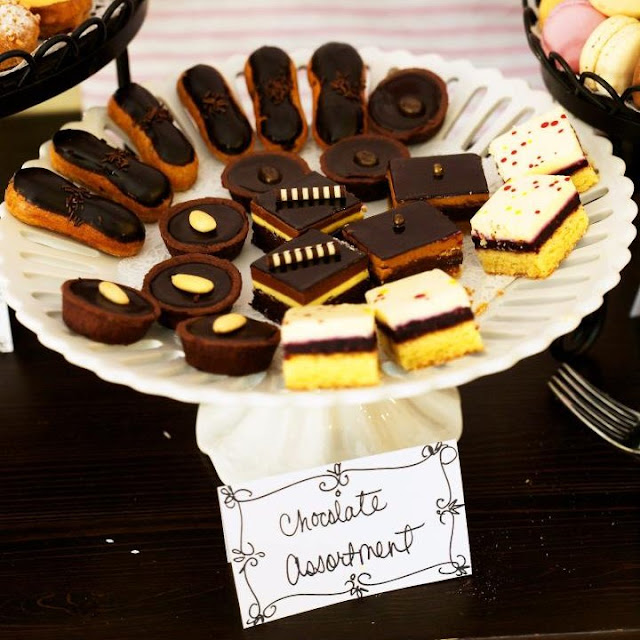 One of the girls even said it felt like we were in a French patisserie. 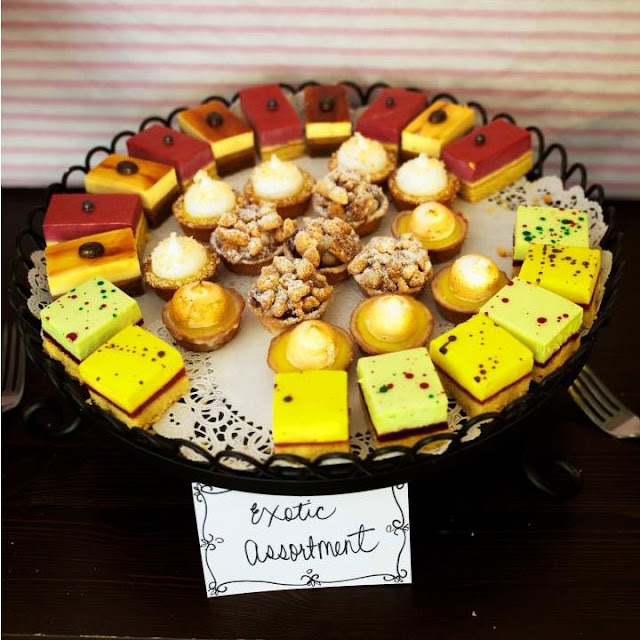 Photo by Ryan Rivera
Everything looked soooo pretty!  They're almost too pretty to eat.  Almost. 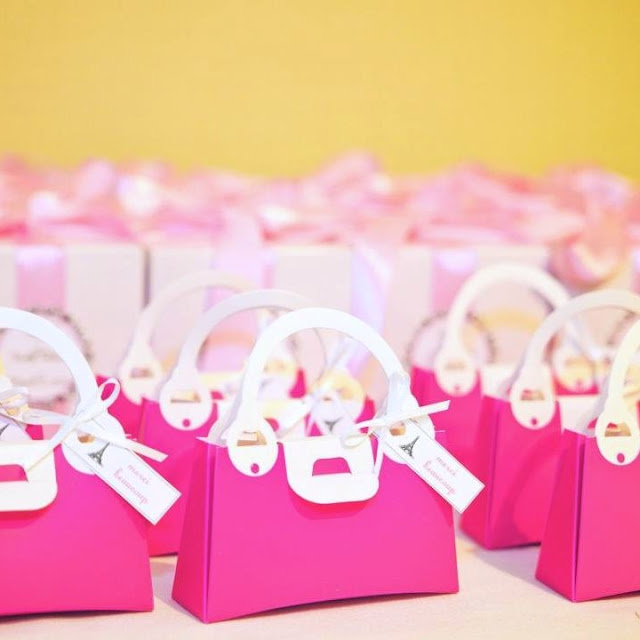 For party favors, I made more champagne truffles as well as chocolate cupcakes.  Since my sister is a handbag designer (she designs for Tory Burch), I thought these purse favor boxes from Paper Mart would be perfect. They're just the right size to hold two truffles. 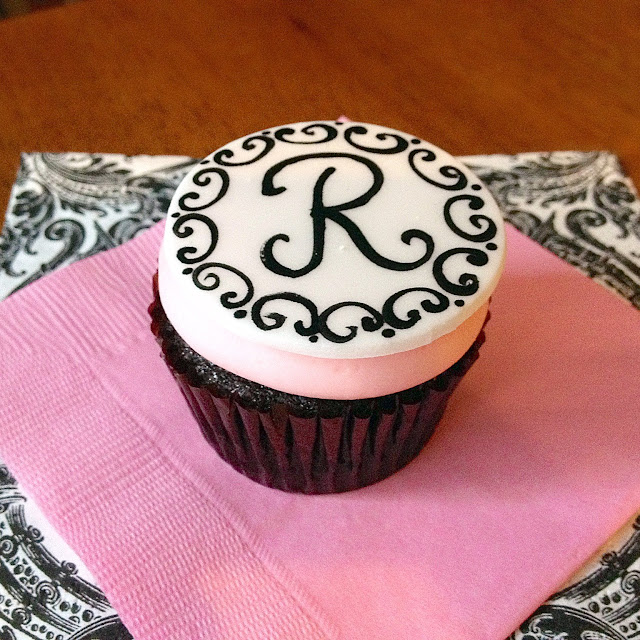 I topped the chocolate cupcakes with some pink cream cheese frosting and a fondant monogram before tucking them inside simple white boxes with pink satin ribbon. 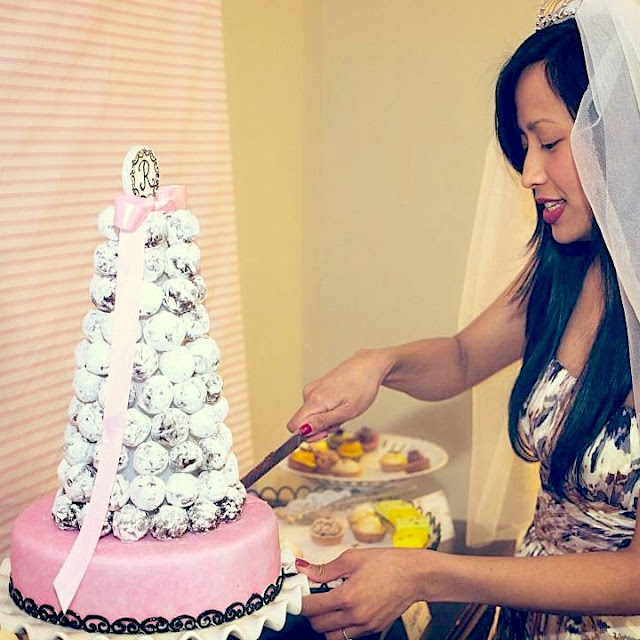 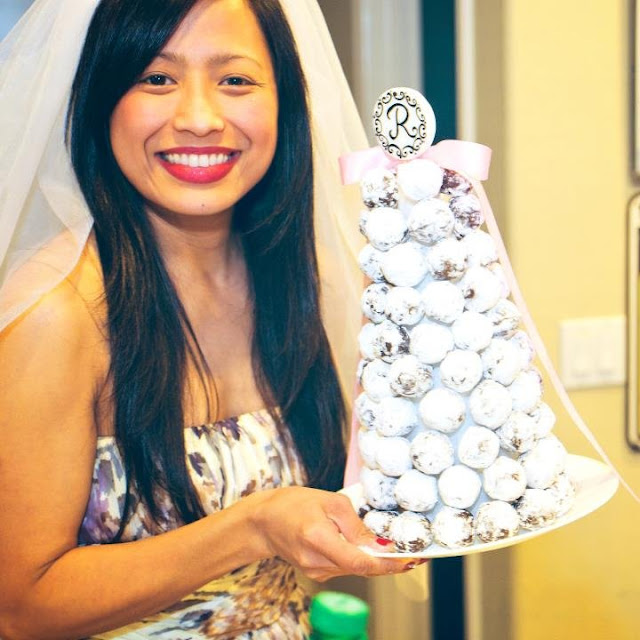 Photo by Ryan Rivera
All she wanted was the tower of champagne truffles on top :-) 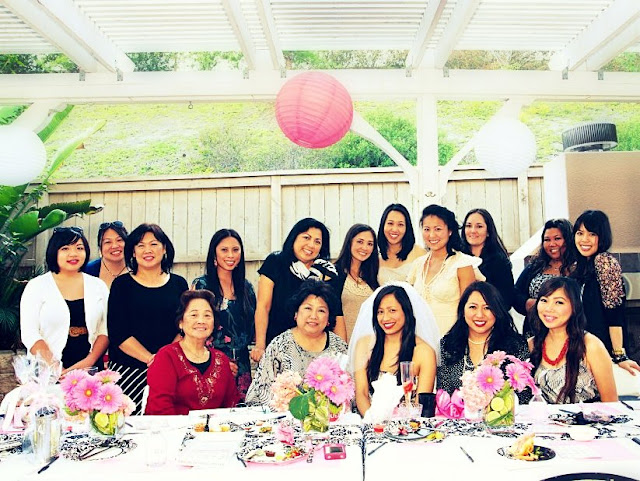 
I'm so happy everyone had fun at Ruth's bridal shower and most importantly, the bride-to-be had a great time hanging out with everyone before her big day :-)

And here's a short video of Ruth and Daniel's wedding :


Please note: I am not a paid endorser nor did I accept any freebies of the brands or products mentioned in this post.  These are items I purchased on my own and wanted to personally recommend to my readers.

Email ThisBlogThis!Share to TwitterShare to FacebookShare to Pinterest
Labels: cakes and cupcakes

Love this cake and dessert table. My niece is having a fancy, very large Bridal Shower in June and I am in charge of the dessert table. I am so glad I found your blog. You inspired me so much!!!! I will definitely be making this truffle, champagne tower. Your are super talented! I will be following your blog!