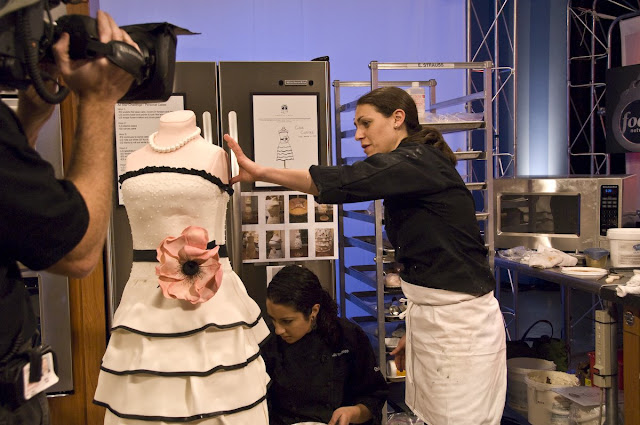 Everyone, set your DVRs to record. The Super Bowl of cake competitions is finally here! Watch your favorite all-star pastry chefs compete in an extreme four-round cake competition. This is gonna be GOOD! I can't wait to watch this.

Thank you Food Network for sharing this press release and photo with me :-)

In the premiere of Food Network Challenge: Last Cake Standing, six enthusiastic Challenge all-stars receive their first task: illustrate one aspect of their lives through cake! The action-packed competition begins with surprise instructions to move into their kitchens and immediately start creating their signature cakes. At the elimination ceremony, a curveball shocks the competitors when they, instead of the judges, are told to eliminate the first cake artist.
Episode 2 - Premiering Sunday, April 12th at 8pm ET/PT

The five remaining competitors take a field trip to Denver’s City Hall where they embark upon an exciting, but complicated challenge: create a top-notch wedding cake in only eight hours. The competitors serve as wedding ceremony witnesses and consult with the newlyweds before completing impromptu cake sketches. The judges reveal the next elimination and the winning cake is served at the reception that very night.
Episode 3 - Premiering Sunday, April 19th at 8pm ET/PT

The competition heats up when the four remaining competitors design over-the-top cakes based on an original superhero, decked out with extreme elements like moveable parts and fireworks. Hours before the competition, they are divided into teams and required to combine their cake designs. The winning team advances to the finale, and the losing duo faces off in an intense, 30-minute “cake-off” to determine who will move on and who will go up in smoke!
Episode 4 - Premiering Sunday, April 26th at 8pm ET/PT
The final three competitors endure a 24-hour cake-making marathon – the longest competition in Challenge history! The finalists create a unique five-foot birthday cake for a set of sextuplets. Upon completion, they must transport their cakes 20 miles to the birthday party. Strategy, endurance and skills are tested and one talented cake artist is finally crowned the winner!
Posted by Art of Dessert at 10:46 AM

Email ThisBlogThis!Share to TwitterShare to FacebookShare to Pinterest
Labels: news

Eek, I'm so excited about this! Thanks for reminding me!

I love that show!

And THAT is why I miss having the Food Network so much. Looks like a great competition.

Thanks so much fo sharing this, I almost never watch TV but love watching the food network cake challenges.

This is gonna be so much fun to watch! Just found your blog and wanted to thank you for the sneak peek. Extreme cake decorating is so fascinating.

I missed it! Does anyone know where I can find a video of it online? My daughter is so mad that we missed it!

We missed it and my daughter is so mad at me! Does anyone know where we can see it on line?

Hi Cohnhead! I think they're gonna post video footage of the challenge on the Food Network Challenge website (there's a link above).

I just finished watching Episone 3 of the contest and was truly shocked at the winners the judges picked. Hopefully in the end, the best cake designer will funally win.

ya so i was just watching last cake standing and all of a sudden our tv went out because of a thunderstorm... :( if anyone knows who won will you please let me know :) thank you

i love that show is great